Mini Page: Walking on the Moon AMP | Kids is proud to announce an ongoing partnership with The Mini Page, now in its 50th year of providing engaging and fun learning opportunities to young readers across the country. This feature was originally syndicated in newspapers the week of July 13 – July 19, 2019. It is distributed digitally here with permission from Andrews McMeel Syndication. Enjoy and share with the young learners in your life!

Fifty years ago, on July 20, 1969, humans set foot on another celestial body for the first time. That day, Apollo 11 astronauts Neil Armstrong and Edwin “Buzz” Aldrin walked on the moon. Astronaut Michael Collins orbited overhead in the space capsule.

The Mini Page celebrates this anniversary by looking back on our amazing first journey to the moon.

The moon missions were launched on May 25, 1961, when President John F. Kennedy announced the goal of sending astronauts to the moon. His challenge sent people on a journey unlike any other in human history. For the first time, people would leave our home planet to travel to another body in space.

But exploration wasn’t Kennedy’s first goal. In April 1961, the Soviet Union sent the first human into space. The United States wanted to prove the Soviets could not beat us. The U.S. was in the middle of the Cold War with the Soviets, where both sides felt threatened by the other.

A gift of hope

The moon landing took place in the middle of great difficulties in the U.S. The Vietnam War and anti-war protests were raging. Sen. Robert Kennedy and Martin Luther King Jr. had been assassinated a year earlier.

But in the summer of 1969, millions of people stopped and watched in awe as humans did something wonderful. For a short time, the moon landing brought the world together. Neil Armstrong took this photo of Buzz Aldrin in front of the lunar module on July 20, 1969.

When Neil Armstrong stepped onto the moon, he famously announced: “That’s one small step for a man, one giant leap for mankind.”

About 1 billion people all over the world watched the moon landing live on TV. Ask your grandparents or other family members what they remember about watching this important event on television when they were younger.

On the way to the moon 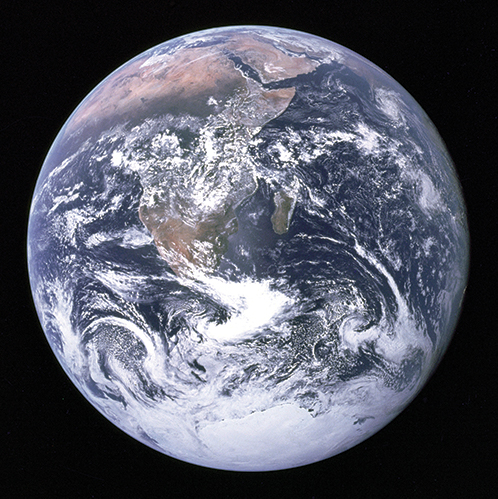 This photo taken of Earth by the crew of Apollo 17 is commonly known as “The Blue Marble.”

The moon missions were named after the Greek god Apollo, the god of light, music and the sun.

Apollo 1 ended in tragedy when three astronauts, Gus Grissom, Ed White and Roger Chaffee, were killed in a fire on the launch pad in January 1967. Apollo 4, 5 and 6 were unmanned flights that were used to test equipment and technology. Apollo 8 was the first mission with humans aboard to orbit the moon.

Just months after the July 1969 landing on the moon, in November, Apollo 12 landed there again, with three astronauts on board.

On the last Apollo mission, astronaut Gene Cernan said this as he stepped off the moon for the last time:

“America’s challenge of today has forged man’s destiny of tomorrow. And, as we leave the Moon … we leave as we came and, God willing, as we shall return, with peace and hope for all mankind. Godspeed the crew of Apollo 17.”