Dana Simpson’s bestselling Phoebe and Her Unicorn series of comics collections and graphic novels is a sparkling sensation with middle-grade readers around the world. Join 9-year-old misfit Phoebe Howell and her vainglorious unicorn BFF, Marigold Heavenly Nostrils, for hilarious and heartwarming adventures. Together, Phoebe and Marigold can tackle any challenge, from school bullies to goblin queens, and everything in between. Along the way, they discover that friendship is the most magical thing of all—after Marigold’s beauty, of course.

Phoebe and Her Unicorn series of middle-grade books has sold over 1.5 million copies to date, with multiple appearances on the New York Times Best-Seller List.

“…a hilarious, sweet, and unsentimental story…”

— Cory Doctorow, author of Down and Out in the Magic Kingdom and Little Brother 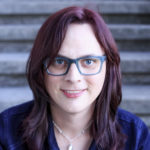